The 33-storey tower will be split into three vertical forms providing:

The proposed office floorplates were designed to be subdivided and arranged in multiple ways to accommodate a range of office occupiers, from incubator spaces and SMEs to multinational companies.  There was significant loss of retail space (7,559sqm) but officers argued that this was acceptable given that the proposed replacement would be ‘flexible, vibrant and rich’, and more suited to modern retail needs. Both members and officers also agreed that the loss of retail space was acceptable given the ground floor proposals would deliver public benefits through the prioritisation of pedestrian routes and public realm.

The project team spoke about how the building’s approach to urban greening was a ‘fundamental’ aspect of the scheme with architecture, engineering and landscaping all formulating an integrated approach to proposals.

Oliver Sells (Deputy Chair) stated that the proposals would provide the area with a much needed ‘shot in the arm’ and welcomed the ‘renewed confidence’ that applications such as this brought to the City. Other committee members agreed and described the application as ‘trailblazing’ and ‘imaginably designed’. Whilst the loss of daylight/sunlight to Leadenhall Market was acknowledged, some members argued that the introduction of flexible retail with a permeable ground floor would help revitalise the Grade II listed market.

Objections and concerns were received from local residents and Historic England who stated that the proposals would cause harm to Leadenhall Market, St Paul’s Cathedral and the Tower of London. Members also raised concerns on the lack of consultation with neighbours, the number of conditions attached to the application, whether refurbishment was extensively explored and the impact on daylight/sunlight to Leadenhall Market.

The scheme was approved 25 votes in favour with four against. 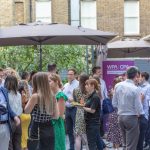